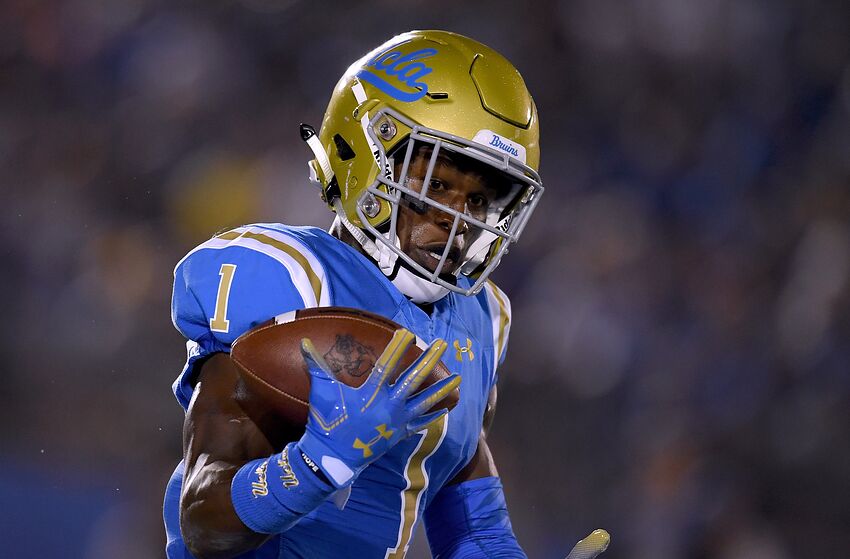 PASADENA, CA - SEPTEMBER 15: Darnay Holmes #1 of the UCLA Bruins juggles a kickoff during the first quarter against the Fresno State Bulldogs at Rose Bowl on September 15, 2018 in Pasadena, California. (Photo by Harry How/Getty Images)

Go Joe Bruin finishes up the position group previews with a look at the defenisve backs. They have the talent, but can they improve off of last season?

The UCLA football team has been known for their dominance defending the skies, but they took a bit of a hit last season as the secondary was picked on in Chip Kelly‘s first year. Defensive coordinator Jerry Azzinaro was looking to have a violent, aggressive defense, but it wasn’t exactly that in Year 1.

The defense had improved in limiting rushing yards, but that just shifted offensive attacks to the air and the first year defense was bombarded in the defensive backfield. Passing yards allowed went from 2,552 to 2,946 as the Bruins allowed 60.9% of the balls thrown their way to be caught, an increase from 57.2%.

But looking ahead, the Bruins return a lot of players and have a lot of young talent ready to change the narrative of the defense. With a year under their belt, the hope is that the defense can reel things in, especially through the air.

Gates went through his ups and downs but he proved to be a pretty solid pairing with Darnay Holmes. Gates is feisty and should be able to use that energy to blossom this fall. Last year, he had 39 tackles (third most among all DBs) and five pass breakups (tied for third on the team). Both Jolly and Williams should be solid backups and will make a difference in the passing game and will add depth and quickness to the sideline defenses.

It was going to be a tough task replacing Jaleel Wadood but Lake did an admirable job in the safety position. Last year, he had the most tackles of any DB and was third on the team with 67 total tackles. He’s a stout defender that has great vision which allowed him to quickly react to anything that came his way. Guidry will get his chance for playing time by backing up Lake as he brings quickness and determination to the secondary. Churchwell made quite the impression during spring. He was speedy, aggressive and closely defended everything that came his way.  Nimmo was injured during spring, so his status is still unknown, but when he’s back to 100%, expect a very mindful defender that can zero-in on passes.

Blaylock is a player that most Bruins fans are excited to see, He is a very skilled DB and his addition to the lineup has only made the defense stronger. He will look to replace leading tackler Adarius Pickett which will be a big task in and of itself, but he showed in spring that he is more than capable of picking up the slack. Osling has also shown some positive development, but consistency is the key. Being able to keep his man in front of him and cut off angles will help him take a step forward during the coming season. Jones might not see the field that much this season, but when he does he’s going to make quite the impact as a reliable tackler.

Teams that don’t plan around Holmes are just asking for trouble. The menace at the other cornerback spot has been a shining light on the defense for the last two years. He has shown that he is more than capable of grabbing interceptions, laying out opponents with big hits and playing aggressive man-to-man defense. Shaw is another one that has shown some positive development. If he’s looking to improve, there’s no one better to learn from than Holmes.

Next: The 30 Greatest UCLA Football Players of All-Time

Martin is another newbie in the defensive backfield that could be a game changer. He’s a very quick and versatile corner that has a high ceiling.