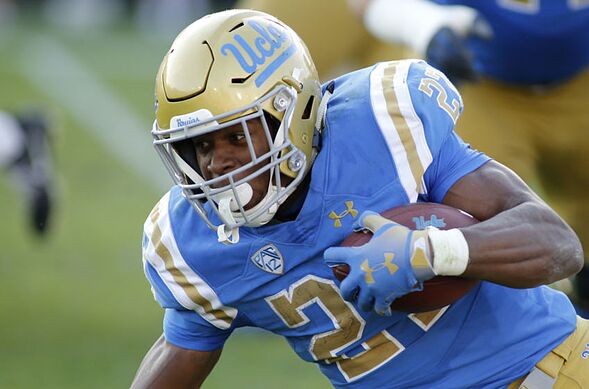 PASADENA, CALIFORNIA – NOVEMBER 17: Running back Joshua Kelley #27 of the UCLA Bruins carries the ball down the field during the second half of a football game at Rose Bowl on November 17, 2018 in Pasadena, California. (Photo by Katharine Lotze/Getty Images)

It may well be that not a single UCLA Football fan correctly predicted the first half of the 2019 season, including Chip Kelly.  It is difficult to imagine a road paved with better intentions, but arriving at worse results.  The loss to Cincinnati was bracing, but ultimately UCLA fans took it in stride.  The loss to SDSU was gutting, but some held out hope.  Oklahoma was an expected demolishing.  The Washington State win to open the conference season was a ray of sunshine, but only because it broke through the raging storm clouds of the rest of a bad first half of a season.  The losses at Arizona and Oregon State erased any hope that UCLA could find significant success in 2019.  The loss of Dorian Thompson-Robinson and Theo Howard to injury likely sealed the Bruins fate to another lost season.

Can the Bruins win a few more games this season?  Sure, anything is possible.  They have some talent at running back and wide receiver, and if the offensive line can cohere for most of a game, they could surprise a team like Stanford, Colorado, or USC.  But the odds of UCLA putting together a better season than last year’s 3-win effort are slim to none, especially if Thompson-Robinson misses much more time, and especially if the defense continues to play poorly.